Paul Thagard recently presented a Killam Lecture at Dalhousie University titled “Eureka, How Creative Intuition Results from Three Processes“. The lecture was fascinating and well presented, providing an overview of a new cognitive theory of how creative discovery is established at the neural cognitive level. Throughout the talk, Dr. Thagard gave considerable attention and praise to the work of his college Dr. Chris Eliasmith who has recently published the book titled How to Build a Brain.

Dr. Thagard explained how three components of cognitive processes could be used explain creative intuition; neural representation (how ideas are represented in the brain), binding (how representations are combined), and competition (between bindings). Another key concept was the establishment of semantic pointers; representations that are bound together to form symbolic units that link diverse neural associations (motor, sensory, emotion,..). Semantic units can be combined in novel ways, providing the basis for creative discovery, and also maintain associations to emotions by the bindings of component neural representations. 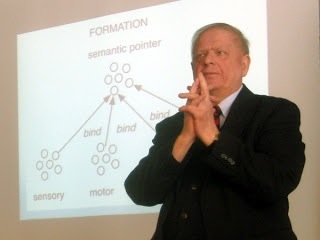 Dr. Thagard standing at the front of the lecture hall used the audience’s perception of him as an example of the theory. Individual gazes (sensory stimulous) cause clusters of neurons to become excited in a temporal pattern, and these representations become bound together to establish a new temporal patterns of neural representation. “Bindings of bindings” result in unique neural representations, of a man at the front of the room, wearing a blue blazer and red tie, with a voice conveying meaningful words.

My thoughts during the lecture — This neurologically based understanding of cognition seems useful for the consideration of how observation drawing could be useful for learning and creative discovery. The linkages between emotions, motor, and sensory neural representations, remain present in the resultant (binding) neural representations. Active observation of a subject is linked with motor neurons and the activity of drawing marks on a page. The activity of drawing marks on a page would also affect the neural representations, strengthening some meaningful aspects of the visual sensory stimulus that is being generated from observing the subject. 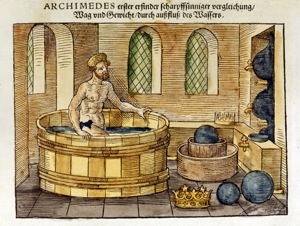 Dr Thagard also used the example of Archimedes, observing the water level rising when he entered the bath as the stimulus that resulted in the Eureka moment when he realized how he could measure the volume and density of the King’s crown. This example was especially useful for highlighting the importance of observation, and the impact of keeping the attention open to “seeing” the world in new and insightful ways.

I look forward to reading some more about Dr Chris Eliasmith’s work, and continuing to follow Dr Thagard’s ideas about creative intuition. The Killam Lectures succeeded in providing a stimulating exchange of ground breaking research that spans the sciences and humanities.